Mosaics found in ancient city of Stratonikeia to serve tourism 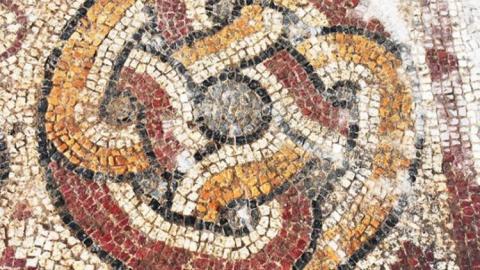 Within the scope of conservation studies, efforts are being made to bring the 1,600-year-old mosaics unearthed during the excavations in the ancient city of Stratonikeia, one of the largest marble cities in the world, into tourism.

Excavation, restoration and conservation works will continue throughout the year in the ancient city of Stratonikeia in the western province of Muğla's Eskihisar district, which is also known as the "City of Gladiators" and is on the UNESCO World Heritage Tentative List.

In the ancient city, one of the most important cities of the Caria region, the settlement of the Carians and Leleges, the indigenous people of Anatolia, maintained its importance during the Hellenistic, Roman, Byzantine, Anatolian principalities, Ottoman and Republican periods.

The artifacts found there are meticulously preserved, and efforts are being made to bring them into tourism.

Professor Bilal Söğüt, the head of the Stratonikeia excavations, told the state-run Anadolu Agency that they found ruins from ancient times in Stratonikeia and that they started work on the northern city gate two years ago.

Noting that they completed works at a certain stage, Söğüt said that in this year's work program, they were carrying out excavations and restorations at the North City Gate, West Street, Latrina and the theater.

Söğüt noted that the drawing and restoration work in the Ottoman-era village square and the houses were also ongoing.

Stating that they started the excavation of an important building located at the junction of the North and West Streets, Söğüt said: "We have had good results from the excavation here. We determined the phases of the buildings in the Roman Imperial period, that there...