Radmila Sekerinska: ‘The Prespa Agreement is a child born in a complicated marriage’ 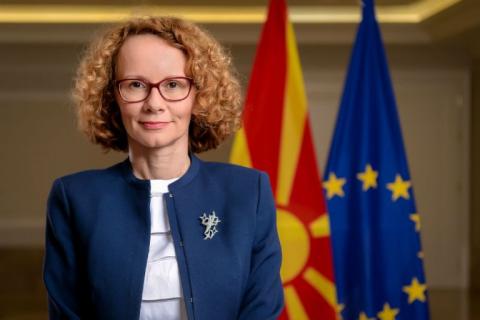 North Macedonia is determined to keep its word and implement the Prespa Agreement, the country's Defence Minister, Radmila Shekerinska, said in an exclusive interview with To Vima, on the occasion of her arrival in Greece to attend the DEFEA defence fair.

Our neighbouring country's Minister of Defence exemplifies the impressive upgrade of bilateral relations in the field of military cooperation and estimates that it can spill over into other fields.

Shekerinska underlined her disappointment over Bulgaria's veto of North Macedonia's formal opening of accession negotiations with the European Union.

It's been three years since the signing of the Prespa Agreement. I would like to ask your opinion about the way the agreement is being implemented and what is your view about the latest complications. Many sides in Greece believe that Skopje is trying to avoid certain parts of its commitments. How do you respond? What moves need to be made in order to surpass this kind of obstacles in the future?

The Prespa Agreement is a child born in a complicated marriage, and which now both parents have to take care of and raise. That marriage, like any other, will have its ups and downs - but hopefully both parents will continue to do the right thing.

Getting to Prespa was like climbing a steep mountain. Its adoption in Parliament was like moving through a minefield, while our constitutional changes were a "make or break" moment for everyone involved. So, why should we expect that its implementation would be a "smooth sail"? Nevertheless, on the skepticism in Greece I would say let us focus on the substance, and not the headlines.

Our institutions are meticulous in the implementation,...