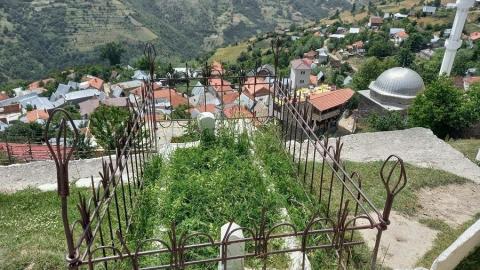 Three years ago, Albania declared the village home to an ethnic Bulgarian minority.

Some were nonplussed. The village has rich traditions of its own but no visible connection with Bulgaria, though many are Gorani a Slavic Muslim community that straddles Kosovo, North Macedonia and Albania and whose language is Slavic.

The villagers are more proud of the ancient grandfather's clock that used to keep time in the mosque, a 150 year-old-linden tree and their curious wedding traditions.

Almost each house has its own relics, like those of Ollomani, that are passed on from one generation to another.

Borje lies in the municipality of Kukes in the far north of Albania, but it is easier to get there from Kosovo, which includes crossing the border twice at the Shishtavec-Krushevë and Borje-Glloboçicë crossings.

Under the terms of a memorandum of understanding between Albania and Kosovo, only locals can use these crossings, but police also allow the same favour to journalists.

A paved road links nearby Glloboçicë village with Dragash in Kosovo but Borja is almost cut off from Kukes and the rest of Albania.

About half of the 900 inhabitants eke out a living by collecting medicinal herbs, which are then sold in Dragash while some 100 locals work in construction in Kosovo, usually for some 25 to 30 euros a day.

"During the communist era in Borje there was a hospital, a dentist and a pharmacy while today we don't have any medical personnel," Festim Collaku, the elder of the village, told BIRN.

"We go to Dragash in Kosovo for both healthcare and dentistry," he added.