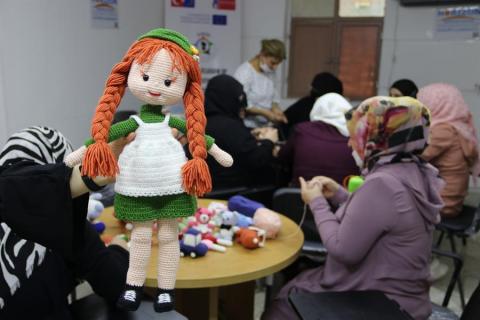 Syrian women, who learned to make amigurumi toys at a workshop organized by a group of young volunteers in the southeastern province of Şanlıurfa, contribute to their family budgets.

In exchange for every toy sold, a child in their country gets a toy.

The project called "Knitting for hope" was realized by young university graduates in the city who decided to implement a social entrepreneurship project to contribute to social cohesion and raise awareness about migration.

The toys produced by women and offered for sale online attract attention both in Turkey and abroad.

Rukiye Güler, a doctoral student of Dicle University and one of the project volunteers, told the state-run Anadolu Agency that they were influenced by the lives of Syrian women they met in various projects and that they realized the project to contribute to them.

Stating that they teach women to make amigurumi toys at home, Güler said: "At the beginning, toys made were quite amateurish, but over time very beautiful products emerged. Our training is ongoing. For every toy we produce and sell here, we send a toy to a child in Syria. We sent many to children staying in camps in Azaz and Idlib before. So, when a toy is bought from us, we gift a toy to a child in return."

Noting that they saw willingness in those women to produce something, Güler said, "We saw hope in our women, they create something, they share their stories with each other, with us and relieve their stress. They are learning something new. We are very happy to touch their lives. We made sales to Portugal and Italy through social media. We sent 20 toys to the USA and 50 to Italy."