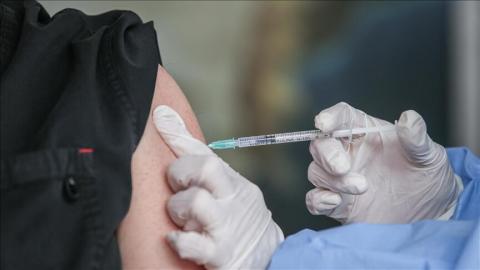 With Turkey's vaccination drive continuing at full pace during the long Eid al-Adha holiday, the number of total doses administered against COVID-19 has neared 64 million.

According to data from the Health Ministry, over 39 million people have received their first dose since Turkey rolled out its vaccination program on Jan. 14, corresponding to 63 percent of the population aged 18 and above.

More than 21 million people, or over 34 percent of the same age group, have been fully vaccinated against the virus. Turkey has also administered nearly 4 million doses of a third dose of the COVID-19 jab.

In a Twitter post, Health Minister Fahrettin Koca urged citizens not to delay their vaccinations while holidaying and get their jabs wherever they were.

"Do not postpone [the vaccination] after your return. Get your jab wherever you are. Our health institutions are at your service to administer the first and second doses," Koca tweeted.

The minister once again warned against potential risks due to the increased mobility during the Eid al-Adha holiday.

He stressed that only two doses of vaccines could prevent the COVID-19 cases from increasing. "The Eid should not offer an opportunity for the virus to spread. We can both celebrate [the Eid] and remain vigilant," Koca wrote in a separate Tweet.

He noted that the daily infections rose again, calling on the public to exercise the utmost precaution during the holiday.

The daily number of infections, which climbed to record highs in April, hovered around 5,000 in late June and until mid-July. However, the latest data from the Health Ministry showed that the daily cases have been on the rise, particularly since July 14, rising above 8,700 on July 20.