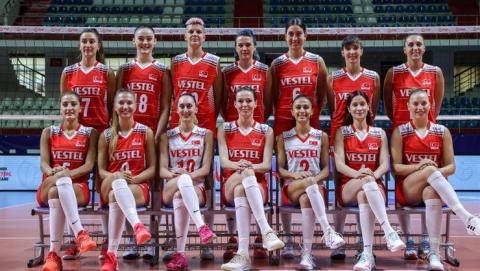 Turkish National Women's Volleyball Team players dream of taking the podium at the 2020 Tokyo Olympic Games that start on July 23.

The team, dubbed "Sultans of the Net," will compete in the Olympics for the second time after the 2012 London Games. Turkey, which achieved second place in Europe and third place in the FIVB Nations League, aims to continue this success in the 2020 Tokyo Games.

Turkish captain Eda Erdem Dündar expressed that they were very happy, proud and excited to participate in the Olympics.

"It will be a tough tournament; we have to go day by day," she said.

"There is no team that we cannot beat if we reflect our own game on the field. Our primary goal is to advance from the group. Then we aim to be among the top four teams," she added.

The 34-year-old player recalled that Turkey was in a very difficult group along with China, the United States, Italy, Russia and Argentina.

"We think that the Olympic champion will come out of our group," Dündar said.

"Defending champion China is in the group. Italy has a new generation; they have a very important weapon like [Paola Ogechi] Egon. The U.S. has been going on with the same system and players for years. Even being in the top four is a great achievement," she added.

Noting that Turkey has not been a regular at the Games, Dündar said, "This is the second time we are participating in the Olympics. It's not a tournament we play all the time."

"We will be deceiving ourselves if we say anything like the aim is to win the gold medal. If we make it to the final four, we will fight for a medal," Dündar added.

Turkey wants to play every game at the Olympic tournament "like it is our last game," said Zehra Güneş, a 22-year-old member of the...