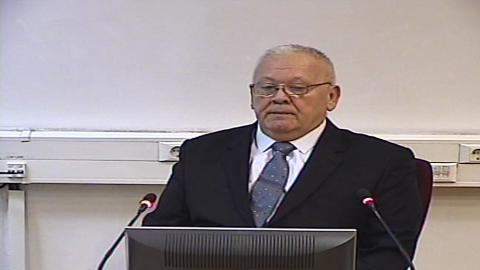 The Appeals Court in Belgrade told BIRN that it has partially upheld an appeal from former Bosnian Serb Army soldier Dragomir Kezunovic and given him a lower sentence of five years in prison for crimes committed during the Bosnian war.

Kezunovic, a former member of the Military Police Squad of the Bosnian Serb Army's Teslic Brigade and the so-called Mice unit, was initially convicted by the Bosnian state court and sentenced to 14 years in prison for crimes in the Teslic area during the Bosnian war.

He was found guilty alongside four other Bosnian Serb military policemen of taking 28 civilians, who were being held in detention at the police station in Teslic and in Pribinic prison, to Mount Borje during the night of June 17-18, 1992 and then killing them.

The verdict said that the others shot the victims, but could only determine that Kezunovic was nearby and "contributed to the murder of the 28 civilians".

After Kezunovic failed to appear in court in Sarajevo for the verdict hearing, the Bosnian judicial authorities asked Serbia, where the defendant lives, to take over the case.

Belgrade Higher Court agreed to recognise the verdict sentencing him to 14 years in prison, but Kezunovic then appealed and the Appeals Court cut his sentence.

His fellow defendants' sentences were also reduced on appeal by the Bosnian state court in August 2019.