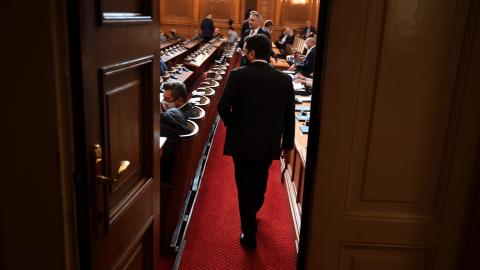 "We're doing this round of discussions because the citizens want stability," Philip Stanev, an MP for There's Such a Nation, told the media on his way to the National Assembly on Thursday.

"You wanted us to be more communicative, so here we are," added Stanislav Balabanov, another MP said.

The decision marks a dramatic U-turn in the position of There's Such a Nation, led by popular TV personality Slavi Trifonov, which came first in the elections by winning 24.08 per cent of the votes.

The party previously rejected any possibility of a coalition. On July 12, Trifonov described "coalition" as a dirty word and during a rare video appearance on his social media claimed the party would only rule with a full majority .

There's Such a Nation is now expected to start dialogue with the other major parties that gained prominence in last year's protest wave - the pro-EU Democratic Bulgaria and "Stand Up! We're Coming!", formerly known as "Stand Up! Mobsters Out!".

Also up for talks is the pro-Moscow Bulgarian Socialist Party and the mainly ethnic Turkish Movement for Rights and Freedoms, two parties which Trifonov had formerly ruled out as potential partners because of the controversies around them.

Meanwhile, Trifonov who, rarely makes public appearances and strictly avoids giving interviews, has still not apeared in the new parliament.

Despite its earlier "all or nothing" attitude, tо muster a majority of 121 MPs and form a government, There's Such a Nation needs votes from Democratic Bulgaria, "Stand Up! We're Coming!" and a fourth party.

If a government proves impossible to form, Bulgaria will have to go...