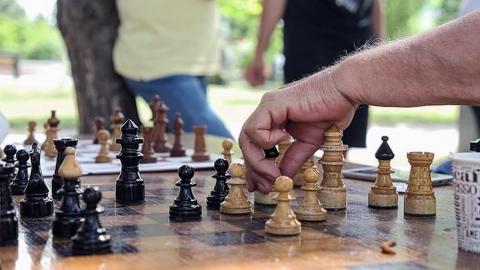 A hierarchy of royal figures occupies two wooden tables placed near the fountain, the so-called Fontana, in the Ulpiana neighborhood of the Kosovo capital, Pristina.

Amid cries of defeat and triumph, the elderly from the area gather every afternoon to play chess under the shade of the trees.

With four chess boards places on two rectangular tables, waiting in line to play with each other, they have created a local meeting point, where, besides playing chess, they can lament the troubles of old age.

For 89-year-old Abedin Hoxha, from Tropoja, in northern Albania, who moved to Pristina around four months ago, integration into the circle of chess enthusiasts has helped him overcome feelings of grief.

Although he does not play chess himself, but enjoys the game of his friends, Hoxha says meeting friends of his age has helped him adapt to a new place, which he never imagined he could do at such an age.

"I come here and hang out with these friends. It's not that I play, but I watch my friends play and I got rid of the sadness a little," he says, adding that it is better than staying alone.

Hoxha came to live in Pristina with his daughter after his wife, two sons, and one son's wife all passed away. "People think I am strong, but I have to push myself through," he says.

"Chess is rarely played as well as here, and to watch them play and talk to them takes away the sadness," he says, excitedly.

For all the enthusiasm of the elderly, and the will of the Chess Federation of Kosovo, the game has not developed as fast as it could in Kosovo, partly due to lack of institutional support.

While the number of players is growing, clubs often do not survive long. Burhan Misini, president of the Kosovo Chess Federation,...