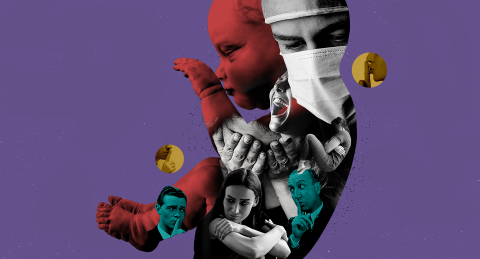 Daniela Drandic of 'Parents in Action: Roda [Stork]', a Croatian NGO that lobbies for the protection of women's rights in pregnancy and parenthood, said the accounts reflect a widespread failure to listen to and trust women, as well as a lack of confidence among women in the efficiency and fairness of the courts.

"When they come to the maternity ward, women are in a vulnerable position, the institution expresses its power over them and they simply do not have a voice in the whole process," Drandic told BIRN.

"Who is more qualified to talk about what is happening to her body than that woman to whom it is happening?" she said. "I'm afraid it will be a long time before we start trusting women, not only in this sphere."

According to the results of the questionnaire,

In 2018, after a Croatian MP shared her own traumatic experience of childbirth, Drandic and the Roda NGO launched a social media campaign under the banner #BreaktheSilence [#PrekinimoSutnju], inviting women to submit written accounts of their experiences with the Croatian health system.

Within days, more than 400 letters had flooded in. Roda submitted them to the health ministry. The campaign resonated in neighbouring Serbia and Bosnia too, where women also began speaking out.