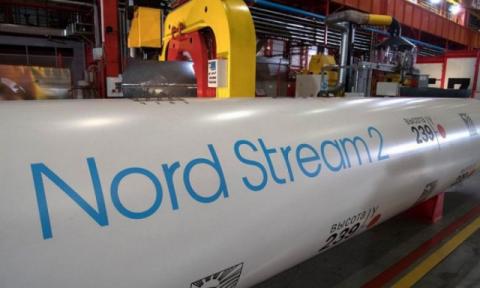 Germany and the United States on Wednesday announced a deal to allow the completion of Nord Stream 2 (NS2) to Europe without the imposition of further American sanctions.
The agreement on Nord Stream 2, announced that Germany and the US commit to countering any future Russian attempt to use the pipeline as a political tool, reported euronews. In a joint statement, the two governments said they were "united in their determination to hold Russia to account for aggression and malign activities by imposing costs via sanctions and other tools" - referring largely to Russian support for separatists in Ukraine.
There are long-held concerns that Nord Stream 2 could give Russia too much power over European gas supplies, or allow gas to be shut off to Russia's adversaries. But the pipeline is almost completed and has the support of German Chancellor Angela Merkel.
Nord Stream 2 is a gas pipeline that would allow Germany to effectively double the amount of gas it imports from Russia. Nord Stream 2's delivery system is designed to carry up to 55 billion cubic meters (1.942 trillion cubic feet) of gas per year, reported DW News.
Berlin and Moscow agreed on the 1,200-kilometer (746-mile) route, which would connect the Ust-Luga area near Saint Petersburg with Greifswald in northeastern Germany. The pipes would run across the Baltic Sea, for the most part following the route of the pre-existing Nord Stream 1 pipeline, which became operational in 2011.
Meanwhile, the two states also agreed to support Ukraine and Poland, which construe the project as a security threat, by funding alternative energy and development projects, reported euronews.
The joint statement says that "should Russia attempt to use energy as a weapon, or commit further aggressive acts...