Glacier on Mount Cilo melting fast due to climate change 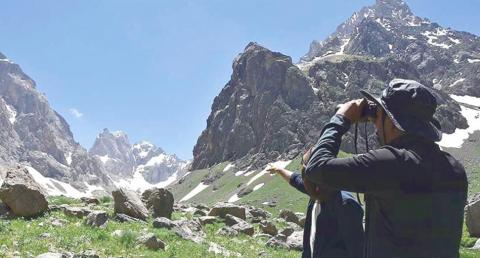 An expedition organized by the Turkish Geographical Association has revealed the extend of the impact of climate change on the glacier on Mount Cilo in the southeastern province of Hakkari.

"The Suppa Durek (Erinç) Glacier was 10 kilometers wide in the Ice Age. In 1948, its size was 4 kilometers, but our latest expedition showed that it shrank to 900 meters," Ahmet Erkek from the Association told daily Milliyet.

A team, comprised of geography teachers, surveyed the swamps and reedbeds located at the 1,950-meter altitude as well as glacial lakes on the 3,800-meter-high Sat Mountains for five days to record the impact of the climate change.

The team later moved to the Cilo Glacial Valley to inspect the Gelyano Glacial Lake and talked with locals.

"The icecaps, glacial valleys and glacial lakes continue to be adversely impacted by the climate change. Locals told us that there were more icecaps at the summits of the mountains in the previous years. We observed that glaciers on the northern side of the Cilo Mountain had melted considerably," Erkek said.

Noting that Sırrı Erinç, a Turkish scientist, back in 1948 reported that the size of the Suppa Durek was 4 kilometers, Erkek said that they observed a 75 percent loss in the glacier mass.

The melting of the icecap is so fast that it shrank from 1.5 kilometers to only 900 meters now, Erkek added.

"We believe all glaciers, except for the one on Mount Ağrı, in Turkey are suffering from ablation. Nano textile covers could be used to protect the glaciers in the Eastern Black Sea, Central Taurus Mountains and the Cilo from the sunrays. The Presena glacier in Italy is covered with sheets to protect it from the sun," Mustafa Varol said.

"We must take some measures against...