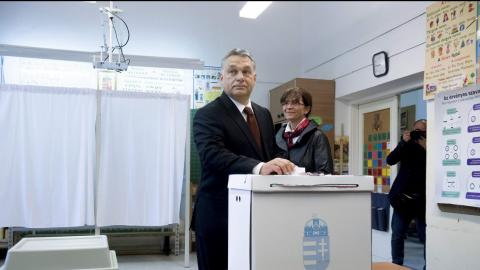 Critics counter that the questions are mostly irrelevant, as no school organises sex education for children without the consent of parents and gender reassignment is not legally possible under the age of 18, and even for those older has been made extremely difficult. And sexual content in the media is already regulated by the EU and the Hungarian media law, pointed out Mérték, a media monitoring think tank.

As such, this latest referendum called by Fidesz, less than five years after the last one, is more likely an attempt by Orban's increasingly besieged government to rally voters and distract from its problems. The referendum's fate is also expected to be similar to the previous one on migration, which was declared invalid due to low turnout.

Running out of ideas

Despite the screaming international headlines about the referendum, experts in Hungary warn it is important to keep a cool head and not to overreact.

"Let me start from the beginning: despite the high death rate, Fidesz emerged as a winner from the coronavirus pandemic in Hungary and its support was on the rise until early summer, when the controversy surrounding China's Fudan University halted that. Surprisingly, it took the government several days to react, which already indicates that they are running out of ideas," Andrea Szabo, senior research fellow of the Institute of Political Science in Budapest, told BIRN.

Problems have mounted for the government even since: the launching of EU infringement procedures, growing criticism over the rule-and-law situation in the country, revelations about the government's use of the Pegasus spyware against journalists and activists, and the possibility the European Commission will reject Hungary's National...