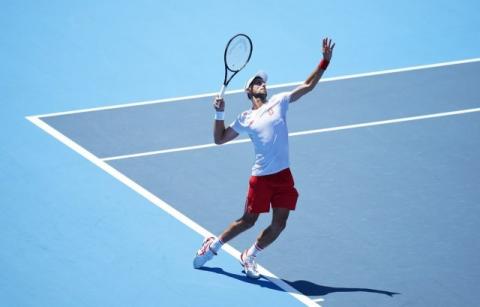 The competition at the "Ariake" Gymnastics Center will certainly be marked by the world number one's performance, primarily because of the opportunity that presented itself to him - to become the first tennis player with the Golden Slam.
Only a WTA tennis player, German Steffi Graf, managed to achieve that back in 1988, while no one can still boast with Golden Slam from Men's ATP list.
Hence, Novak will have a terrible motive to "kill two flies" with one blow, win the long-desired gold for Serbia and leave alive the dream of that Golden Slam, because in case of triumphing in Japan, in late August and early September, he would wait for the last step on the road to history, the US Open in New York.
Of course, Novak knows very well that the most important thing is to concentrate exclusively on the competition in Tokyo, which will have its own specifics, but also its advantages, primarily in the form of his favorite surface, so he will try to use it to reach gold. We must never forget that Novak had a "dress rehearsal" two years ago in Tokyo, at the same place, and he won that tournament, and in the final he beat John Millman, a potential opponent this year in the third round.
However, the history of his participation in the Games says that not everything was ideal, at least not by his top standards.
Djokovic has a bronze medal from Beijing in 2008, but everything after that did not go as he wanted, and the main culprits for that were Andy Murray and Juan Martin del Potro, players who stopped him in his previous Olympic campaigns.
The situation is different now, Murray, although he is defending the last two gold medals from the Games (London 2012 and Rio 2016), is far from the goal. He is out of form, he has hardly appeared in...