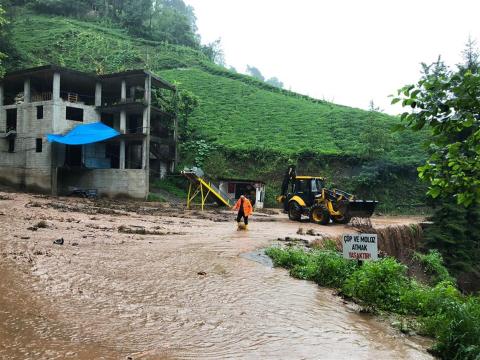 Heavy rain has once again hit the Black Sea province of Rize, less than two weeks after the torrential rain and flooding in the city killed at least six people while two others went missing.

In the Fındıklı, Çamlıhemşin and Ardeşen districts of the province, the creeks overflowed their banks.

In Fındıklı, some roads were blocked while the heavy rain left several businesses and homes flooded, causing damage to farmlands.

Two villages were evacuated, and their residents were transferred to safe areas, said the governor of Rize, Kemal Çeber, adding that the rain is expected to continue overnight.

Rize received some 110 kilograms of rain in just 12 hours, according to the governor.

"We rescued nine people. There are no casualties," Çeber also said.

Some 2,800 personnel and 800 vehicles are taking part in the rescue efforts in Rize, the governor added.

President Recep Tayyip Erdoğan called in the morning to get information about the current situation.

The heavy rain also hit another Black Sea province of Artvin, particularly the district of Arhavi.

"The districts of Arhavi and Murgul appear to suffer most. Some people were stranded. The units are working to remove the water in apartments' basements," Soylu said.

According to the minister, teams from Trabzon province and neighboring Erzurum were transferred to Artvin to help with rescue work.

"One or two people were injured, and they are receiving treatment," he added.

Soylu also dismissed suggestions that a dam collapsed in the affected area, saying, "This is not correct information."