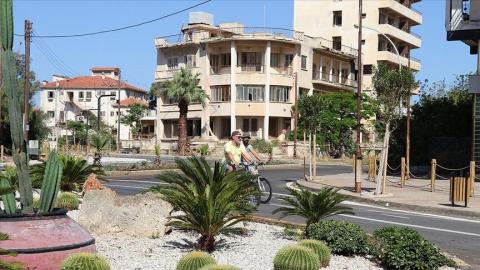 Önal emphasized Turkey's full support for the latest steps taken by the Turkish Cyprus on the Varosha issue and the vision of a two-state solution put forward based on sovereign equality, conveying Turkey's views on this issue to Nuland, the ministry tweeted.

The EU does not have the right to have a say in Turkey's statements regarding Varosha, in the face of this attitude that is against its own rules and attitudes, Şentop said on July 21. "First, they have to account for their violation of the rules they set. In this way, a double-standard, two-faced attitude takes place before the eyes of the whole world," Şentop stated.

The Turkish Cypriot authorities announced on July 20 a partial reopening of an abandoned town for potential resettlement and change of military status to civilian, drawing a strong rebuke from the rival Greek Cypriots of orchestrating a land grab by stealth.

Addressing the ceremonies on July 20 for the 47th anniversary of the Cyprus Peace Operation, Erdoğan said the opening would be carried out with utmost attention to...