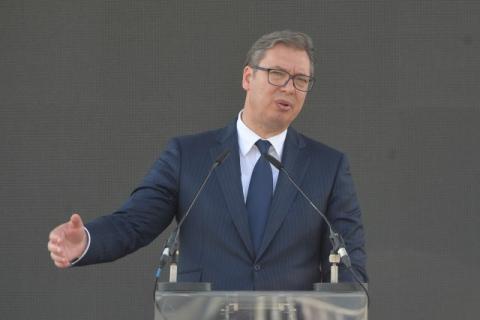 President of Serbia said that these allegations were absolutely false and that his name was intentionally mentioned, without mentioning the name of those who cooperated with Belivuk.
"One nice gentleman first said that he did not kill or slaughter anyone and that they were nice gentlemen who were accommodated by the regime and that they did all this in agreement with me. Then one said that we met in an apartment in Zvezdara, and the other that we met at the house in Ritopek", Vui said, answering the questions of the journalists to comment on Belivuk's claims.
"I was thinking whether to answer, but I will address the nation soon, regarding this issue, I need 48 hours," he pointed out, adding that he was ready to go to the polygraph in public and to give statement to all competent authorities "so that everyone can see he was telling the truth".
Vui pointed out that, if he saw them at any location, or talked to them, he was not only ready to resign from the position of president, but also to report himself and stay in prison for the rest of his life.
"Why did they choose such a way of defense - it was not they who came up with it, but those who bring them messages. We will disclose how the mafia counselors brought those messages," he announced.

According to him, it is logical that all this is happening because Belivuk and Miljkovi are trying to get themselves on the political map because they have had political support in certain media so far.
"I now expect Belivuk to be a candidate for president, and Marko a 'butcher' for prime minister, because they have indebted some people so much," said Vucic.
He added that he was glad that he was mentioned. "I am ashamed to answer to criminals. It is...