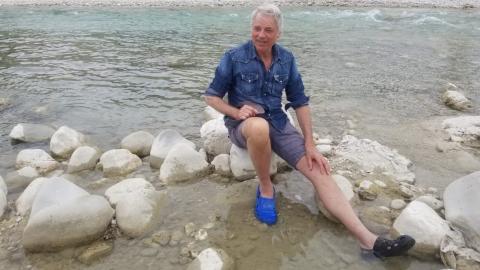 Local TV broadcasting a special statement by Bulgarian TV host turned politician, Slavi Trifonov, and leader of the 'There Is Such a People' party after the country's parliamentary elections, in Sofia. Photo: EPA-EFE/VASSIL DONEV

After another inconclusive Parliamentary election, what next for Bulgaria? Slavi Trifonov, the leader of There is Such a Nation (ITN), has signalled that, as the biggest party in the new Parliament, ITN will propose its own government, made up largely of professionals and experts.

The only catch is that ITN lacks a majority, yet at the same time it is acting as if other parties need it, rather than the other way around. The message to other opposition parties who would need to support his government is - take it or leave it; support an ITN government, or new elections. Enthusiasm among ITN's potential coalition partners is not particularly high. Meanwhile, to many observers, Trifonov is beginning to look a lot like his predecessor, Boyko Borissov.

A monitor of the Central Electoral Commission displays the preliminary results of the country's parliamentary elections held on 11 July, in Chisinau, Moldova, July 12, 2021. Photo: EPA/Doru Dumitru

Unlike in Bulgaria, the recent Parliamentary elections in Moldova delivered a clearer than expected mandate to govern for the pro-European PAS of President Maia Sandu. Yet with such a great victory also comes great responsibility.

Our analysis looks at what lies ahead for Moldova and its future PAS-led government. There are, it seems, no shortage of potential problems and pitfalls, from vested corrupt interests...

EduMin Cimpeanu: We support UNESCO effort in ensuring equal access to education for all
Antibiotice's business turnover advances 11pct in H1 2021
ForMin Aurescu on official visit to Chisinau, set to reaffirm support for President Sandu's reform program
ANM: Unstable weather alerts in most of the country, until Wednesday evening

Pro-European Forces Score Landslide Win in Moldova Election
Ludovic Orban: Dear Moldovans, it is in your power today to decide the future of the country
Barna urges Moldovan citizens in Romania to go to polls