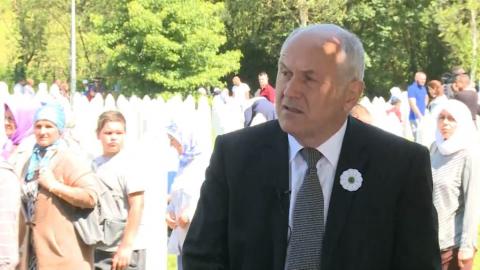 Transgressors can be punished with prison sentences ranging from six months to five years, said the internationally-appointed High Representative, whose role is overseeing the implementation of the peace deal that ended the 1992-95 Bosnian war.

Inzko said he was imposing the changes because he was "deeply concerned that prominent individuals and public authorities in Bosnia and Herzegovina continue to deny that acts of genocide, crimes against humanity and war crimes were committed during the armed conflict".

Inzko announced that he has also imposed an amendment to the criminal code to outlaw public incitement to violence on the grounds of race, colour, religion, descent or national or ethnic origin. The penalties can range from three months to three years in prison.

He further declared that "public dissemination or distribution of tracts, pictures or other material" denying genocide can be jailed for a minimum of one year.

Giving any recognition, award, honour or privilege to a person convicted of genocide, crimes against humanity or war crimes can be jailed for a term not less than three years, he added.<...