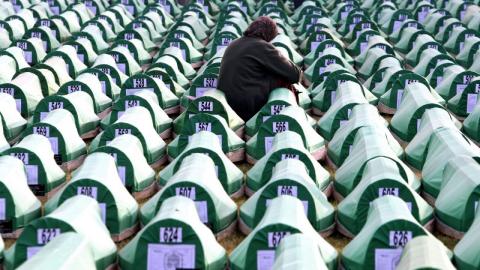 The announcement on Friday of a ban on genocide and war crimes denial by High Representative Valentine Inzko, the international official who oversees implementation of the peace deal that ended the 1992-95 Bosnian war, was hailed by representatives of survivors of the Srebrenica gecocide.

"Many mothers died without living to see this," said Munira Subasic, president of the Mothers of Srebrenica and Zepa Enclaves association.

"This law will be good for two reasons, namely to ban the humiliation of and insults to the mothers and to protect the [court] judgments that have already been handed down," Subasic added.

She said that the Mothers of Srebrenica will monitor any public denials of the 1995 genocide of Bosniaks by Bosnian Serb forces and urge the prosecution to "bring them to justice".

Inzko announced earlier on Friday that he has imposed an amendment to Bosnia and Herzegovina's criminal code to outlaw the public denial, condoning, trivialisation or justification of genocide, crimes against humanity or war crimes when this is done in a way that is "likely to incite to violence or hatred".

Inzko said he was imposing the changes because he was "deeply concerned that prominent individuals and public authorities in Bosnia and Herzegovina continue to deny that acts of genocide, crimes against humanity and war crimes were committed during the armed conflict".

The move sparked an angry reaction from the Serb member of Bosnia's tripartite presidency, Milorad Dodik.

"Serbs will never accept this. This is the last nail in the coffin of Bosnia and Herzegovina," said Dodik, Radio-Television Republika Srpska reported.

Dodik and other political leaders do not accept that the Srebrenica massacres constituted genocide,...