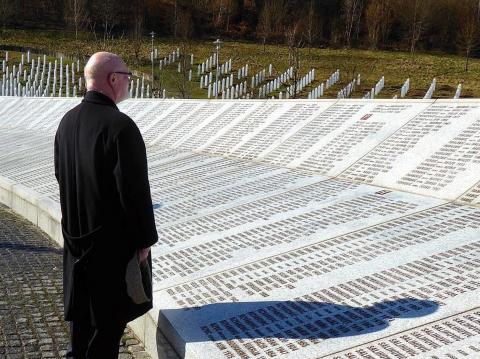 He had come to work with an investigative team put together by the International Criminal Tribunal for the Former Yugoslavia, ICTY to collect evidence about deaths of more than 7,000 men and boys from Srebrenica who had been killed by Bosnian Serb forces in a series of massacres in July the previous year.

"Although the war was over, there were sporadic outbursts of violence in the area near Kalesija [a town near Tuzla], where a temporary morgue was located. In some situations, we had to be evacuated, because we received threats from people who wanted to interfere with our work," he told BIRN in an interview.

The temporary morgue was located in a former garment factory, which he remembers as a "grim place". There was no running water, a shortage of electricity and sanitation was a problem, but the biggest issue that the forensic investigators faced was the number of bodies that were arriving every day.

"We were soon overwhelmed with bodies. It was important that we carried out detailed and meticulous autopsies to ensure that the evidence we gathered for the prosecutors, was irrefutable," he explained.

"I was used to finding and recording severe injuries, but the cruelty perpetrated on the victims shocked all of us. Men had been beaten, stabbed, and clubbed before being executed. Many also had been blindfolded and had their hands tied very tightly, behind their backs, often with thin wire," he continued.