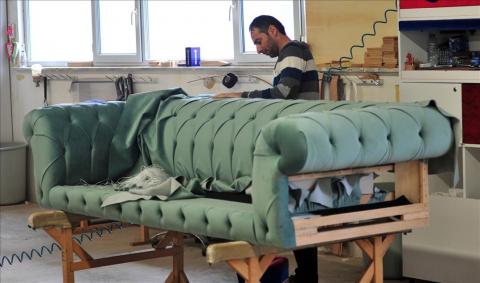 Turkey's furniture exports jumped 35 percent in the first half of 2021 compared to the same period in the previous year, marking a record level of $2 billion.

Ahmet Güleç, the head of the association, said the upward trend was expected to continue for many years.

The Turkish furniture sector ranks eighth in the international market, but it wants to climb to fifth place, he said.

"We believe that we can do it very easily; we need support for promotion and branding," he added.

Recalling the sector's export expectation of $4 billion for this year, he said the first-half figures proved this target.

However, rising costs of raw materials, such as fabric, medium-density fibreboard and chipboard, as well as electricity price hikes could pull down sales, Güleç said.

Recently, the Turkish government limited exports of raw materials used in furniture production, including flakeboard, oriented strand board, fiberboard and some types of wood.

These materials were entered in the list of the Goods Subject to Registered Export, according to the country's Official Gazette published on June 4.

Turkey's chipboard and fiberboard exports increased by 71 percent during the pandemic period.

Exports of raw materials to China, the largest furniture exporter in the world in normal times, hinders Turkey's furniture manufacture, the sectoral associations complained in...