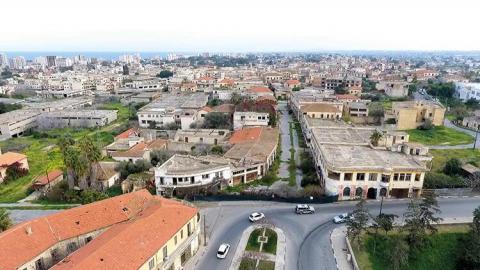 With the Turkish Cypriots' decision to revert the military status of a pilot zone, the ghost resort Varsoha, into a civilian one, the initial step for resettlement is expected to affect 350 Greek families.

Daily Hürriyet photographed a part of the pilot zone of the ghost suburb's residential area, which corresponds to Elmu Street of Aya Nikola neighborhood of Varosha in Turkish Cyprus.

In the town of Varosha, which covers an area of 5 square kilometers, a pilot area of 175 acres was selected, and its military status was abolished.

A total of 350 Greek families will be given the opportunity to return to their homes through the court in the first place.

The first step taken was the opening of civil visits in September last year. The second step was announced during the historic visit of Turkish President Recep Tayyip Erdoğan on July 20. During the Independence Day celebrations, Turkish Cypriot President Ersin Tatar said that they had decided to remove the military status of an area that corresponds to 3.5 percent of the town.

The city of Varosha, which extends to the coast adjacent to the city of Famagusta, is located within an area of 5 square kilometers.

The area, whose military status was abolished, starts at the border of Varosha, adjacent to the Famagusta Municipality, at the back of the city's coastline where the five-star hotels are lined, and is bordered with Democracy Street, which is famous in the city and where the tradesmen were concentrated. It ends in the nation's garden with the Bilal Ağa Masjid, inaugurated by Erdoğan and Tatar on July 20.

In the full expression of the decision of the regional council of ministers, the area which was removed from military status is 174,643 square meters, approximately...