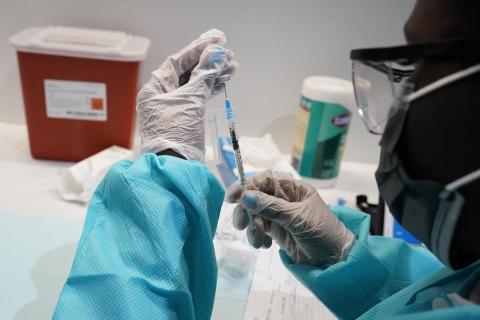 More than half of all European adults are now fully vaccinated, the EU said on July 22, as countries across Europe and Asia battled fresh outbreaks blamed on the fast-spreading Delta variant.

The European Central Bank said uncertainty over the wave of infections meant it was keeping the cash taps open to ensure the nascent economic recovery isn't snuffed out.

German Chancellor Angela Merkel said cases in her country were rising "exponentially", while in Japan the delayed Olympic Games were set to open with almost no spectators and with a blanket of Covid rules in place.

The spotlight, meanwhile, once again turned on the origins of the virus after the WHO called for an audit of the Chinese lab at the heart of speculation about where it first emerged, sparking a fiery response from Beijing.

More than four million people have died from the virus since December 2019, and though rates of vaccination are picking up globally, Delta is fuelling a rise in infections and prompting governments to re-impose anti-virus measures.

The EU said on July 22 that 200 million Europeans had been fully vaccinated, more than half of the adult population but still short of a 70 percent target set for the summer.

The fresh data came as Merkel urged more Germans to get jabs, sounding the alarm over a fresh spike in cases in Germany.

"We are seeing exponential growth," she told a news conference in Berlin, adding that "every vaccination... is a small step towards a return to normality".

Germany has seen an incidence rate of 12.2 new cases per 100,000 people over the past seven days - more than double rates in early July.

"With a rising incidence rate, it could be that we need to introduce additional measures," she said.