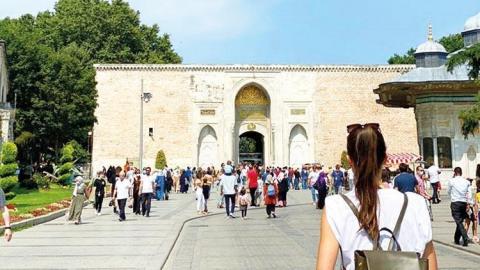 Tens of thousands of people left Istanbul for resort towns to spend the long Eid al-Adha holiday in the country's Aegean and Mediterranean coasts, but the megacity is enjoying strong interest from international tourists.

Millions of people across the country hit the roads well before the Eid holiday started. Their destinations were either their hometowns or resorts, but the situation was no different for the residents of Istanbul, which has a population of nearly 16 million.

Business owners in Istanbul's popular hotspots, such as Sultanahmet, reported a noticeable pickup in tourist activity during these days.

"There are not many domestic tourists in the city, but the interest from international tourists has soared. Our daily revenues increased nearly five times compared to two months ago. The occupancy rate at our hotel is around 80 percent, up from 30 percent two months earlier," said Ahmet Aslan, the manager of a hotel in Sultanahmet.

Most of their guests are from the United States, while tourists from European countries are also staying at the hotel, Aslan said, noting the rise in travelers from the Middle Eastern nations, such as Kuwait, Qatar and Lebanon.

"Our revenues not only from hotel operations but also eatery services are increasing," he added.

Serbay Dereci, another hotelier in the same area, stressed the rise in room prices in the face of the strong demand.

Noting that they mostly expected European tourists, Dereci said that there was strong interest from Arab tourists.

"There is no regular tourist flow, but we are still happy...