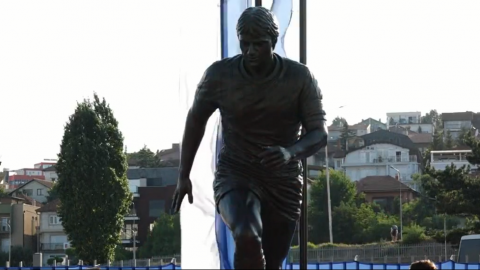 A statue of Kosovo's best-known football player, Fadil Vokrri, was unveiled on Friday at the Pristina city stadium named after him. The statue was unveiled to mark what would have been his 61st birthday.

"Vokrri was the king of the pitch… he was a person with influence on and of the pitch. This statue will serve as an inspiration for our work and for national players to learn how they should fight for the national jersey," the head of the Kosovo Football Federation, FFK, Agim Ademi said during the ceremony.

"Fadil Vokrri was the pride of Kosovo. In a time when things in Kosovo became difficult, Fadil was elected the best football player in former Yugoslavia. When he had the ball in his possession, spectators stood up cheering and when he scored, the spectators jumped up in the air," Kosovo Prime Minister Albin Kurti said.

Vokrri passed away in June 2018 after a heart attack. At that time, he was head of the country's Football Federation

During his footballing career, Vokrri played for Kosovo teams FC Llapi and FC Prishtina, before joining Belgrade's FC Partizan in 1986 where he went on to win a league championship. He also played for Yugoslavia's national team from 1984 to 1987 and was named the country's best player in 1987.

During his mandate as the head of the Kosovo Football Federation, Kosovo joined the Union of European Football Associations, UEFA and the global football governing body FIFA in 2016 - both immense achievements for the country's international recognition in sports.