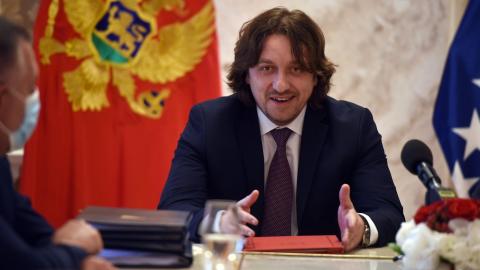 "The border agreement cannot be reviewed, nor can its revision be performed. There can be no arbitration because this implies a territorial dispute. Montenegro and the Republic of Kosovo confirmed by the concluded Agreement that they don't have disputed territorial issue," the Interior Ministry told BIRN.

On July 7, Kosovo Prime Minister Albin Kurti said the Demarcation Agreement with Montenegro, in the form in which it was ratified in 2018, would not be implemented. Kurti also announced that Kosovo will form a new commission for demarcation and maintenance of borders.

"I will make an effort to correct everything that was done unfairly and wrongly in 2018 when that agreement was ratified. I will use the mechanisms, as much as I can, to correct the terrible fatal mistakes the previous government made," Kurti told Kosovo's parliament.

In March 2018, Kosovo's parliament ratified a long-delayed border agreement with Montenegro, which both the EU and US had repeatedly pushed for.

However, Kurti's then opposition Vetevendosje movement bitterly opposed the deal, arguing that Kosovo was being asked to surrender land to Montenegro.

Kosovo and Montenegro started consultations on signing an agreement on demarcation of their 79-kilometer border in 2012, and an agreement was signed in Vienna on September 2015.

But its approval by the Kosovo Assembly was blocked by disputes over two locations and pastures covering about 8,000 hectares.

The Montenegrin parliament approved the deal in 2016, but in Kosovo the vote was postponed several times due to a lack of support among MPs.