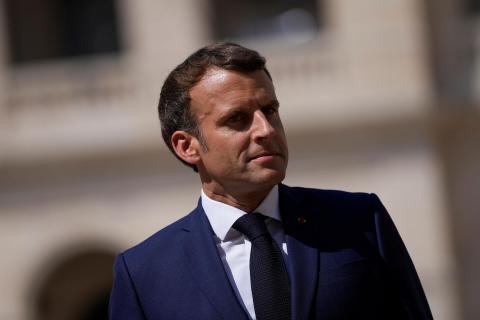 President Macron - whose name was on a list of alleged targets - ordered "a strengthening of all security protocols" following a specially convened meeting of the nation's Defence Council, his office said.

Macron "has himself changed his phone and number for certain exchanges", it said.

The NSO Group's Pegasus software - able to switch on a phone's camera or microphone and harvest its data - is at the centre of a growing storm after a list of about 50,000 potential surveillance targets was leaked to rights groups.

Amnesty International and French media nonprofit Forbidden Stories collaborated with a clutch of media companies, including the Washington Post, the Guardian and Le Monde, to analyse and publish the list.

The widening scandal is drawing in countries from Saudi Arabia and the United Arab Emirates to Morocco, India and a host of other mostly emerging economies.

Hungary was the only EU country listed as a potential user of the spyware, with hundreds of targets including journalists, lawyers and other public figures.

Hungarian prosecutors said on Thursday they had opened a probe "to establish the facts and to determine whether and, if so, what crime has taken place", the Budapest Regional Investigation Prosecutor's Office said.

Foreign Minister Peter Szijjarto has insisted the government "has no knowledge of such data collection", while some critics decried the move as a time-wasting manoeuvre.

"They have years to investigate if they want......