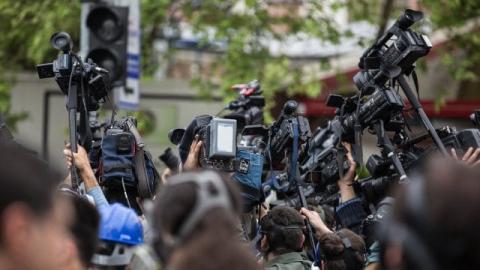 The tabloid Informer accused KRIK of having "fired the first bullet" at the Serbian President Aleksandar Vucic, suggesting that it had jeopardized Vucic's safety in cooperation with the gang. Another pro-government tabloid, Objektiv, called KRIK "a mafia-slaughtering" organization.

The media campaign started after KRIK on Thursday published news quoting an alleged official statement that Veljko Belivuk, a leader of the "Principi" gang gave to the prosecution.

In it, Belivuk claimed he did many favours to the current regime, including breaking up protests of taxi drivers, preventing violence at the Pride parade, and stopping chants against Vucic at football games.

Belivuk said he also met Vucic once in person and other ruling party members.

The President afterwards denied he had ever met Belivuk, saying that he was willing to go to jail and pay for his time spent there if that turned out to be true.

KRIK editor Stevan Dojcinovic said on Friday that the article he published was carefully written, emphasizing that Belivuk could not be completely trusted, but that his allegations coincided with some things that were known in the past.

"We knew that this criminal group had strong connections in the police and politics, we knew that the government controlled the stands at the Partizan FC stadium through the Belivuk group, we knew about some things before," Dojcinovic said, adding that they had not published all of Belivuk's claims but only key matters of public interest.