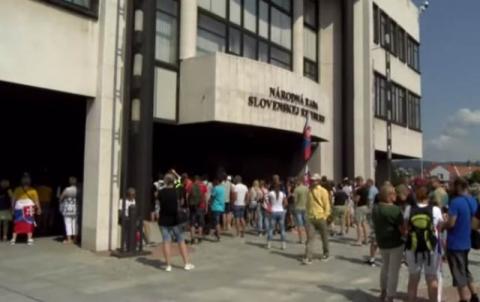 Some protesters shouted "Treason" and one bore the sign "Stop Corona Fascism" because of a law that would give vaccinated against COVID-19 easier access to public events and spaces, so that, for example, shopping malls could be entered with digital certificate.
The government hopes that such a law will motivate people to get vaccinated.
"We are taking measures to protect the lives of all citizens, including demonstrators," said Prime Minister Eduard Heger.
Some demonstrators wrapped themselves in the national flag or waved it in front of the parliament in the Slovak capital, Bratislava.
One policewoman was slightly injured, the media report.
The protest continued peacefully and eventually subsided after the police intervention.
A member of the European Union, with a population of 5.5 million, is fighting hard for people to be vaccinated against COVID-19.
By Thursday, only 34.9 percent of the population had been fully vaccinated, the data show.
It is one of the lowest vaccination rates per capita in the EU.
Some opposition parties have publicly opposed vaccination, including former Prime Minister Robert Fico, who claimed that he will not be vaccinated.