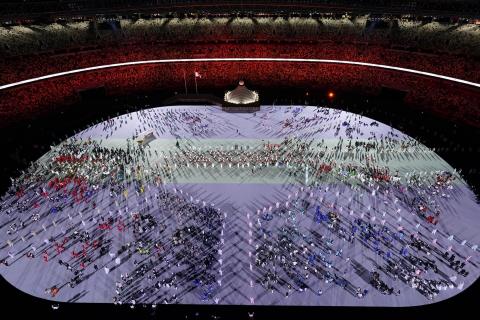 Some 5,700 out of the 11,000 athletes that have been registered, attended a parade at the opening ceremony for the Tokyo 2020 Summer Olympics.

Some of the athletes have skipped the ceremony because of early competitions on July 24 or to avoid risk of exposure to the coronavirus. And this parade differs from most others in the past because the nations are being spaced out, a nod to social distancing.

Hundreds of volunteers are on the stadium floor as well to greet the athletes as they walk through. Many athletes are waving; others are capturing their entrance on their phone cameras.

Moments before the parade, a wooden set of Olympic rings was displayed at the center of the stadium in a nod to the 1964 Tokyo Games. There, athletes from around the world were asked to bring seeds that could be planted and become trees.

Wood from 160 pines and spruces, seeds that came from Canada, Ireland and Northern Europe, were used to build the set of Olympic rings displayed on July 23.

Naruhito attended the 1964 Tokyo Olympics as a 4-year-old, watching the marathon and equestrian events. Bach won a gold medal in fencing at the 1976 Montreal Games.

They were followed by a delegation chosen to carry the Japanese flag into the stadium, before the host nation's national anthem was performed by singer Misia.

Tributes were paid to those lost during the pandemic, and the Israeli delegation that was killed at the Munich Games in 1972. A moment of silence was offered inside the stadium.

With a blaze of indigo and white fireworks lighting the night sky, the Tokyo Olympics opening ceremony has started.