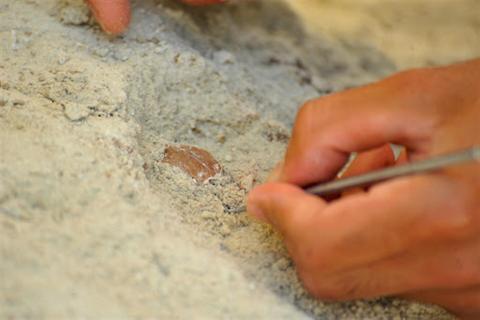 What is believed to have been food once upon a time - around 10,000 B.C. - has been found in the northwestern province of Bursa in a cave that has come to light after a landside and was discovered by a shepherd.

Experts have said the food has remained intact because it has been covered in resin to this day, likening it to modern Turkey's "Mustafakemalpaşa cheese dessert."

Rock paintings and kitchen materials found in the cave in the Mustafakemalpaşa district, 85 kilometers from the city center, have thrilled archaeologists.

The food, product covered in resin and calcium carbonate, was found next to a pottery believed to be 10,000 years old.

The food, experts have said, was made with wild wheat, plant root and a substance similar to milk.

Experts believe the pieces found in the cave will shed light on many unknowns about ancient culinary culture.

Preliminary examinations showed that the cave drawings, which are clearly seen, depicted an animal similar to a buffalo or a cow being hunted and trying to be domesticated. The bowls, pots, spoons, stirrers and sharp kitchen utensils found in the cave that have remained intact due to calcium carbonate were also taken for examination.

Mustafakemalpaşa district, formerly called Apolyon and located on the shore of Ulubat Lake, is the most versatile agriculture and livestock center in the region. The district, where there are over 100 large and small caves, has huge marble beds.

The largest elephant fossil in the world was found during the long-time...