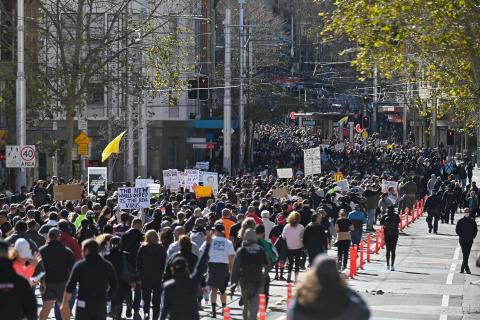 Thousands of anti-lockdown protesters gathered in Australia's two largest cities on July 24, with several arrested in Sydney after violent clashes with police.

A group charged mounted officers while throwing pot plants and bottles, as opponents of Sydney's month-long stay-at-home orders took to the streets.

In Melbourne, local media said thousands of protesters had thronged the streets after gathering outside the state parliament in the early afternoon.

Maskless demonstrators flouted rules on non-essential travel and public gatherings a day after authorities suggested restrictions could remain in place until October.

Police in Sydney said they had launched a "high-visibility policing operation" in response to the protest.

"So far during the operation, a number of people have been arrested," the force said.

Organizers had dubbed the protest a "freedom" rally and publicized it on social media pages frequently used to spread vaccine disinformation and conspiracy theories.

Helicopters buzzed the streets above Sydney, a city of five million people that is struggling to contain an outbreak of the Delta variant.

Similar gatherings were planned in other urban centers.

The state of New South Wales, of which Sydney is the capital, reported 163 new cases Saturday for a total of nearly 2,000 infections in the current outbreak.

After escaping much of the early pandemic unscathed, around half of Australia's 25 million people are now in lockdown across several cities.

There is growing anger at the restrictions - which are often only partially observed -...