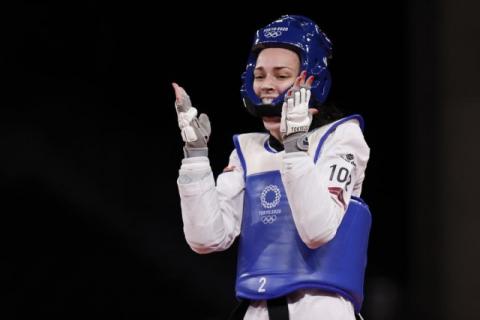 In the category up to 49 kilograms, Tijana reached the medal through repechage.
Bogdanovic defeated the Japanese Miyu Yamada and brought Serbia the second medal from the Olympics, after the silver won by the Damir Mikec.
After the victory over the Japanese competitor Miyu Yamada 20: 6, Bogdanovi did not hide her emotions and enthusiasm on the battlefield immediately.
She shouted "Come on!" and fell into the arms of her coach Dragan Jovi.
On the verge of tears, she celebrated the second Olympic medal in her career, after the silver medal from Rio.
A picture to remember!

Tijana's first statement: "I'm sorry for not being able to fight for the gold" Foto: OKS

Bogdanovic pointed out that she was happy because of the medal, even though she wanted gold.
"I am very happy because of the medal. I am happy that I got a second chance to fight for a medal at these Olympic Games. I am still sorry that I was eliminated in the first round, but the girl from Spain is very good and ready for this tournament. I was in her place in Rio, I was the youngest, she is in my place now and I understand how she thinks, she has nothing to lose, I have no doubt that she will win gold", said Bogdanovi, as reported by OKS.
She dedicated the medal to Damir Stajner, who did not travel to Japan due to a car accident, as well as to her deceased grandmother.
"It is very important for me to mention on behalf of my entire team, that we dedicate this medal to Damir Stajner, the executive director of the Olympic Committee of Serbia, who unfortunately is not with us in Tokyo due to unfortunate circumstances, but I know that he is with...

Moscow and Pyongyang will get Closer, Putin Promised Kim Jong-un