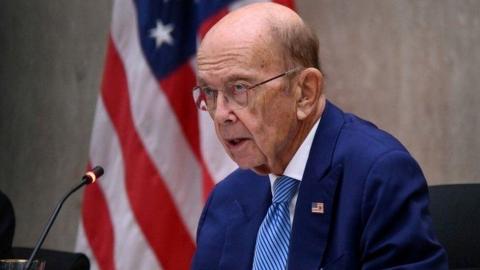 Beijing announced sanctions on seven American citizens and entities on July 23 in response to a U.S. advisory on deteriorating freedoms in Hong Kong, just days ahead of a visit from a senior Biden administration official.

Tensions between Beijing and Washington have soured on a number of fronts, including human rights, trade, cybersecurity and the origins of the COVID-19 pandemic.

Last week, the United States warned its business community of the growing risks of operating in Hong Kong, following a clampdown by China in the major financial hub.

U.S. government agencies led by the State Department told entrepreneurs that they face particular risks from the imposition of a draconian new security law a year ago, which it said could "adversely affect businesses and individuals operating in Hong Kong."

While in office, Ross broadened the list of companies that cannot trade with U.S. firms without a prior license, including Chinese telecom giants such as Huawei and ZTE.

Beijing's move comes ahead of a weekend trip to China by U.S. Deputy Secretary of State Wendy Sherman, intended to address deteriorating ties between the two countries and the highest-level visit an official has made under President Joe Biden.