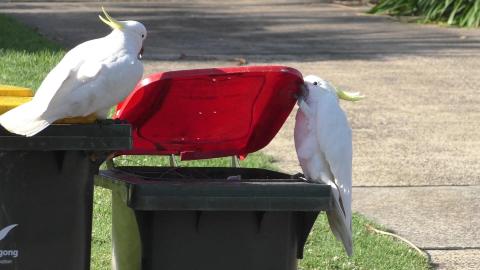 A few years ago, a Sydney scientist noticed a sulfur-crested cockatoo opening his trash bin. Not every resident would be thrilled, but ornithologist Richard Major was impressed by the ingenuity.

It's quite a feat for a bird to grasp a bin lid with its beak, pry it open, then shuffle far enough along the bin's edge that the lid falls backward, revealing edible trash treasures inside.

Intrigued, Major teamed up with researchers in Germany to study how many cockatoos learned this trick. In early 2018, they found from a survey of residents that birds in three Sydney suburbs had mastered the novel foraging technique. By the end of 2019, birds were lifting bins in 44 suburbs.

"From three suburbs to 44 in two years is a pretty rapid spread," said Major, who is based at the Australian Museum.

The researchers' next question was whether the cockatoos had each figured out how to do this alone, or whether they copied the strategy from experienced birds. And their research published Thursday in the journal Science concluded the birds mostly learned by watching their peers.

"That spread wasn't just popping up randomly. It started in southern suburbs and radiated outwards," said Major. Basically, it caught on like a hot dance move.

Scientists have documented other examples of social learning in birds. One classic case involves small birds called blue tits that learned to puncture foil lids of milk bottles in the United Kingdom starting in the 1920s, a crafty move, though less complex and physically demanding than opening trash bins.

But observing a new "cultural trend" spreading in the wild, or suburbs, in real time afforded the cockatoo researchers a special opportunity, said Lucy Aplin, a cognitive ecologist at Max Planck...