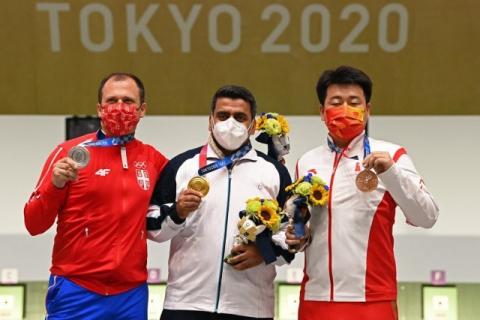 He finished second in the air pistol discipline, behind the Iranian Javad Foroughi, while the third is the Chinese Pang Wei.
Javad Foroughi has triumphed in the men's 10m air pistol final, setting a new Olympic record of 244.8 points to take gold at the Asaka Shooting Range.
Damir Mikec won silver with the result of 237.9 points, whereas Pang Wei won bronze with 217.6 points.
Mikec had to go through the drama and the last eighth place in the qualification until the finals, but he was brilliant when it was most needed.
When he encountered the elimination system, he was more and more confident, although he attacked medals from the background, in the first series from the fourth position. He stepped up, was more precise and in the end made the biggest success of his career! To the numerous medals he had won on European, World Championships, World Cups, Mikec added Olympic to his rich treasury.
Congratulations, Damir!

Mikec after taking the silver: I'm not yet aware of the success Foto: OKS

Mikec "strikes" silver medal, saying that he was still not aware of what he had done.
He added the most important medal at his fourth Games to his rich career and medals from various World and European Championships, as well as World Cups.
"I am not yet aware of the success. I have always wanted to complete medals from all competitions, I just missed the Olympic one. I don't miss it anymore. I managed to win it from the fourth time. I believed in myself," said Mikec.
He also described how he fought on the "line of fire".
"I started the match well, then I struggled a bit. I was lucky. I entered the finals where I corrected all the mistakes. All the finalists were extraordinary, but I was based only on my task. The...