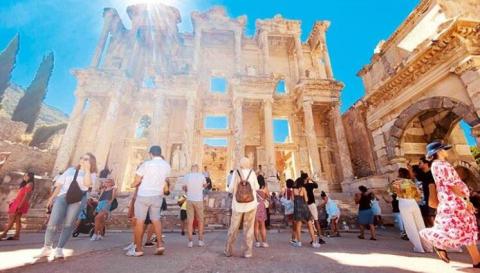 Those looking for an alternative spot to visit and spend the Eid Al-Adha holiday have flocked to the ancient city Ephesus and the Şirince neighborhood in the Selçuk district of the western province of İzmir on the Aegean coast.

Most holidaymakers chose popular resort towns which became extremely crowded during the holiday. But those seeking alternative destinations have traveled to Ephesus and Şirince.

However, even Ephesus is full of visitors, forming long lines to buy a ticket to enter the ancient city to be fascinated by thousand-year-old ruins. Tour guides have to speak loudly to make them themselves heard in the sea of tourists.

The visitors to the ancient site are mostly from European countries but there are also a noticeable number of holidaymakers from Russia.

"We had fewer foreign tourists over the past two years. But Europeans start to come again," said a vendor, who sells souvenirs.

Hoteliers in Şirince are also happy with the revival in the tourism activity.

Occupation rates at the hotels in Şirince were at 85 percent during the Eid al-Adha.

Shop owners also complained that speaking businesswise the past two years were very bad for them, but the increased mobility and inflow of tourists provided some respite.

As interest in Şirinci grew, prices went up between 25 percent to 30 percent with room prices in hotels rising 50 percent.

Cars' number plates indicate that visitors all over the country are coming to Şirince, known for its boutique hotels, from Istanbul, Ankara, the Central Anatolian province of Konya and as far as Trabzon on the Black Sea coast.

Tourists are showing special interest in shops which sell wine, soaps and souvenirs.

Şirince is a picturesque village built on...