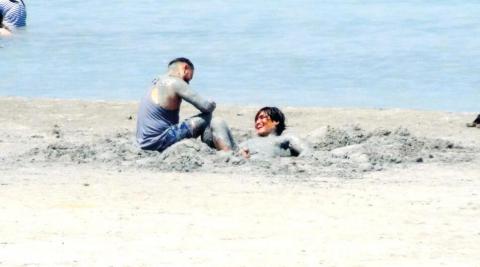 Authorities have fined five people for vandalizing the famous Lake Salda in the province of Burdur.

Dubbed as "Turkey's Maldives" due to its white beach and clear waters, the lake attracted large crowds during the Eid al-Adha holiday.

Last August, the Environment and Urbanization Ministry banned smoking on the beach due to its hazardous impact on the lake. Authorities also prohibited mud baths in order to protect the natural structure of Salda.

Mehmet Göker, a lawmaker for Burdur from the opposition Republican People's Party (CHP), shared a video on Twitter showing people taking a mud bath and smoking hookah on the beach.

"Bans are not enough; they must be enforced too," Göker wrote.

In response to Göker's post, Burdur Governor Ali Arslantaş said that inspections to protect the lake were conducted on a regular basis.

"Necessary actions have been taken against the individual who violated the rules," Arslantaş tweeted.

Separately, the Governor's Office issued a statement noting that five people were fined 2,100 Turkish Liras (around $245) for taking a mud bath and consuming tobacco products.

In 2020, similarities between the lake and the Jezero Crater on Mars captured the interest of the U.S. National Aeronautics and Space Administration (NASA) in its research on possible life on the Red Planet.

Salda is the only known lake on Earth that contains carbonates and depositional features (deltas) similar to those found at Jezero Crater.

While nearly 1.5 million people visited the site in 2019, the number of visitors declined to around 800,000 due to COVID-19-related restrictions last year.