Permits of 400 taxis at Istanbul Airport revoked over irregularities 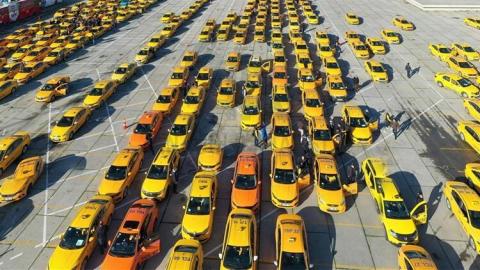 The Istanbul Metropolitan Municipality has canceled the work permits of a total of 400 taxis operating at the major airport in the city after inspections revealed that their taximeters did not meet standards.

Over the past year, people lodged complaints with the municipality regarding the fares the taxis operating at Istanbul Airport were charging. They claimed that fares differed from one taxi to another.

In one recent incident, members of a family traveled from the airport to the Pendik district in two taxis. One driver charged around 1,300 Turkish Liras ($152), while the other charged only 300 liras. The family immediately filed a complaint, which triggered an action from municipality authorities.

Teams from the municipality inspected a total of 700 taxis operating at the airport earlier this month. They found that 400 of those taxies were using an alternative application, called NTaksi, which was not integrated with the municipality's taximeter software İ-Taksi.

The fares charged with NTaksi are not compatible with the fares the municipality set for taximeters, the authorities found.

Drivers using the NTaksi app charge 8 percent to 10 percent more from customers, according to the authorities.

"Taxi drivers at the airport develop their own application. This is a breach of regulations. We suspended them from operating but allowed them to work only during the Eid al-Adha holiday," an official from the municipality said.

Delegations from the associations representing taxi drivers are expected to hold a meeting with municipality officials early next week.

"Taxi drivers can use applications developed by private firms, such as Bi-Taksi and NTaksi, but the municipality demands all taxis use its app İTaksi. Yes,...