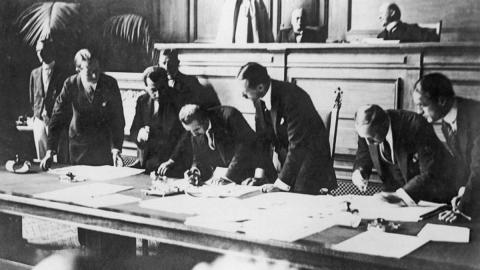 "Today is the 98th anniversary of the Lausanne Peace Treaty, one of the founding documents of the Republic of Turkey. Our heroic nation's struggle for independence, that it crowned with victory despite all kinds of impossibilities, betrayals and difficulties, has also been confirmed in the international arena with the Lausanne Peace Treaty," President Recep Tayyip Erdoğan said in a statement.

Turkey continues to advance toward its "bright future" with the "courage and inspiration is receives from history," Erdoğan said.

"We continue to thwart treacherous ambitions for the unity and integrity of our country and the peace, tranquility and well-being of our nation," he added.

Signed on July 24, 1923, the treaty is regarded as the final treaty concluding World War I. The pact also secured the foundation of the modern Republic of Turkey after the War of Independence against the occupying forces of Britain, France, Italy and Greece.

The treaty recognized the boundaries of Turkey as well as the conditions under which non-Muslim minorities would live in the new republic.

The Treaty of Lausanne was signed in the Swiss city of Lausanne. The original text of the treaty is in French.