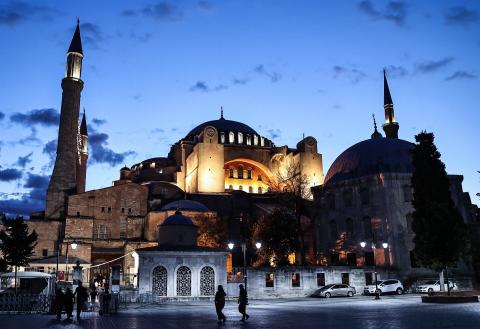 The Turkish foreign ministry on July 24 rejected the U.N. cultural agency's remarks on the state of Hagia Sophia after it was converted to a mosque and said its statement is "biased and political."

The ministry said it "rejects the relevant articles of the UNESCO World Heritage Committee's decisions on Istanbul's historical sites understood to be driven by prejudiced, biased and political motives."

Hagia Sophia and Kariye Mosques are state property and are being protected "meticulously," it said, accusing the U.N. of infringing on Turkish sovereignty.

"From the very outset of the restitution process, Turkey has been in open and uninterrupted communication and cooperation with UNESCO World Heritage Center," the statement said.

"The two visits of UNESCO Advisory Mission to Istanbul upon Turkey's invitation clearly manifest our constructive and transparent approach which is also reflected in the Advisory Mission reports," it added.

In a Twitter post, Erdoğan said Hagia Sophia "is the symbol of the revival of our civilization."

"Praise be to our Lord, who showed us these days ... I hope that the voices of the call to prayers, salawats [prayers] and Holy Quran will not go missing from the domes of this great shrine until the end of time," he added.

He also posted a video showing the first Friday prayer in Hagia Sophia Mosque for the first time after an 86-year hiatus.

After more than eight decades as a museum, Turkey's iconic Hagia Sophia reopened for Islamic worship for the first time last year, with Friday prayers with the participation of thousands of...