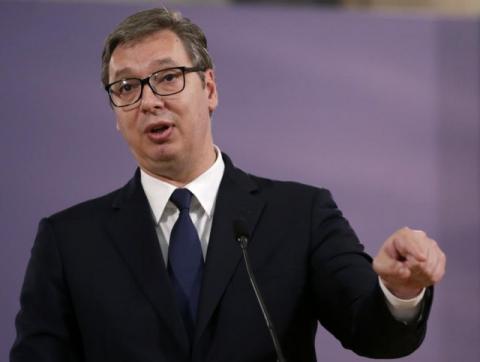 During the show, disturbing footage of the murder of Vlastimir Milosevic in March 27th Street in Belgrade at 6.50 a.m. was shown.
"This is a conflict between two clans, something that was imported to Serbia from Montenegro, this is a war between the Kavac and Skaljari clans," said Vucic.
The Kava and kaljari clans both originate from Kotor, on Montenegro's picturesque Adriatic coast. They were once part of the same gang smuggling drugs from South America into Europe, but split in 2014 after a cocaine deal in Spain went bad, creating a violent rift that has deepened ever since. Most significant organized criminal groups have decided to join one of these two rival criminal groups.
"There is a business and economic-political background. This event is important because it is a big problem for us. I brought a complete records of the murders, the worst things happened back in 2001, 2002, 2006, and since then in 2018, but also in 2020. Why is it important for us? We have to make things right... I cannot come to terms with the reality because no one has the right to kill anyone, even when it comes to criminals," Vucic said.
Vui reminded that Veljko Belivuk and Marko MIljkovi were suspected of that murder, they were arrested, but even after that they were released. He also recalled that behind everything is the drug trade and the struggle for supremacy in criminal circles.
Vui said that Miljkovi once boasted that he had killed two of his godparents. Vui explained that the karate master Miloevi was killed only because he prevented Velja Nevolja from occupying the night clubs on the water.
"He was on their way of bringing drugs on the night clubs. He beat some of them because he was physically stronger. By the way, he was Marko Miljkovi's...