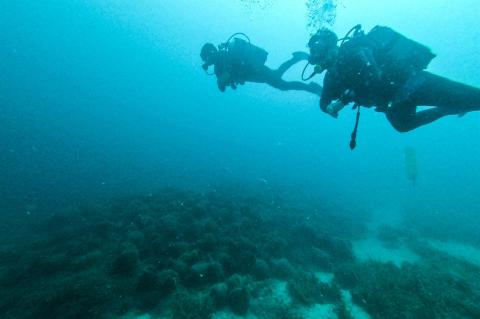 Emerging from the crystal-clear turquoise waters of the Aegean Sea, Hans-Juergen Fercher has just returned from his fourth dive to where mounds of 2,500-year-old wine pots mark the site of an ancient shipwreck - and Greece's first underwater museum.

"This is a combination of diving and archaeological diving. It's diving into history," says the 48-year-old psychiatrist after pulling himself onto the deck of the Triton dive boat.

"It makes it special and unique."

The museum beneath the waves at Peristera, a rocky outcrop off the island of Alonissos, opened in 2020, though the site has been largely mothballed until now due to COVID-19 restrictions.

As Greece opens up its vital tourism industry, the site offers an example of a new and more sustainable source of revenue.

Divers like Fercher and Danish wine-cellar maker, Lisette Fredelund, are willing to pay 95 euros ($110) a dive - about 50 percent more than the cost of a regular recreational scuba outing - for a guided tour of a site once the preserve of professional archaeologists.

"It was just amazing," said Fredelund. "I was just, while we were down there, trying to imagine what it had been like being on a vessel transporting wine."

More wrecks have been discovered in the area - the middle of the country's largest marine reserve - holding out the prospect that more such museums will open.

Greece has made diving part of its focus to attract visitors since legislation passed in 2020 making it possible to access such sites, Tourism Minister Harry Theoharis told AFP.

"This is a type of tourism that attracts people all year round, a special audience that pays generously to dive," he said, adding that 10 new diving parks are ready to be licensed under the...