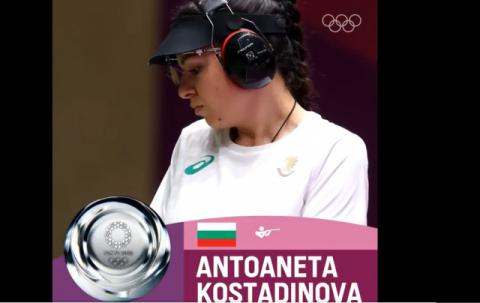 Bulgaria has its first medal from the Olympic Games in Tokyo! It was won by our sport shooting athlete Antoaneta Kostadinova, who won silver in the 10 meter air pistol discipline.

For Antoaneta Kostadinova, this is the first medal in her third participation in the Olympic Games.

Antoaneta Kostadinova was shooting very consistently throughout the competition. She made her best shots in the qualifiers in the last series and this climbed her to the sixth position.

Unfortunately, our other representative in the discipline - Maria Grozdeva, failed to qualify for the final. The two-time Olympic champion took 43rd place, and after the race she officially confirmed that the Tokyo Games will be the last race in her glorious career.

Kostadinova is the third Bulgarian ever to win an Olympic medal in pistol shooting. The other two are Maria Grozdeva and Daniela Yorgova.  Antoaneta brought the first Olympic medal for our country in sport shooting in 17 years.