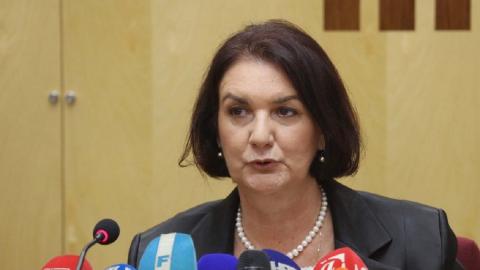 The Disciplinary Commission of Bosnia's High Judicial and Prosecutorial Council, HJPC, the country's most senior judicial body, has axed Gordana Tadić as Chief Prosecutor of Bosnia and Herzegovina, it announced on Monday, citing professional negligence among other issues.

It said it had established her responsibility for offences "not only involving the performance of the prosecutorial function, but also other activities relevant to the prosecution's business, thus showing negligence … in performing official duties and failure, for unjustified reasons, to act in accordance with the decisions … of the Council," the HJPC statement announced.

A disciplinary lawsuit was filed against Tadic in early April 2021, but the disciplinary office dropped one count accusing her of damaging the reputation of the prosecutor's office in relation to an unfounded request for payment of claims related to the rent of an apartment.

According to the lawsuit, Tadic was negligent in the performance of official duties, knowingly ignoring the order of the HJPC to assign cases to prosecutors through the automatic distribution system, known as the TCMS, during her term as chief prosecutor.

She was also charged with failing, for unjustified reasons, to act in accordance with the decisions of the Council, concerning the failure to ensure the initiation of personal data protection procedures by applying the Law on Protection of Classified Information, security checks of the staff of the Prosecutor's Office that handle classified information, as well as the Council's order that all Bosnian judicial institutions implement all measures of the said law.

At a hearing on July 12, the disciplinary office requested that measures be imposed on Tadic for non-fulfillment...