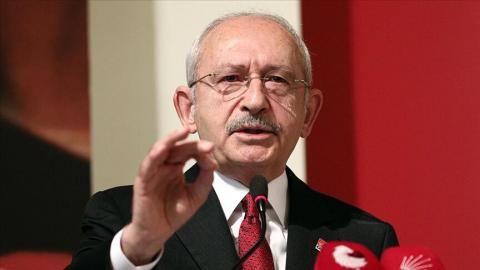 Main opposition Republican People's Party (CHP) leader Kemal Kılıçdaroğlu has reiterated his warning against refugee influx towards Turkey, saying the issue is a matter of perpetuity for Turkey.

The "West has seen" that they can turn Turkey into an "open prison for refugees," Kılıçdaroğlu said in a video message on Twitter on July 25.

"The real survival problem of our country is the influx of refugees. Now we are caught in the Afghan influx," he said, criticizing the government for remaining silent on the issue.

"This issue has two victims. One is you, my dear people, and the second is our refugee brothers. Therefore, it is unacceptable to reduce this issue to racism. It is not an issue that we can solve by disparaging our guests, who are the other victims of the issue." the CHP leader said.

He blamed the government for hosting the Syrian refugees in return for money from the European Union and the Western countries.

He recalled recent remarks by German Chancellor Angela Merkel, who said that she did not foresee an EU membership for Turkey in the near future but welcomed efforts by Ankara on the refugee crisis.

"The matter seems to come to another breaking point very soon. Merkel says, 'You cannot enter the European Union, but you can continue to host our refugees who are trying to come to the EU.' She did not neglect to say, 'You are very successful in this matter, too.' Frankly, Merkel celebrated our success in moving from the goal of full membership in the European Union to the refugee watchdog of the European Union," he stated.