Fire balloons with the message: Time is running out, followed by the exchange of fire 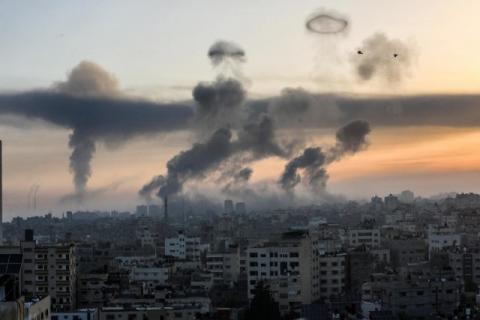 According to the sources of the radio station, the positions of the groups connected with the Palestinian resistance units near the cities of Khan Yunis and Gaza were shot at, and there is still no information about the victims or damage, TASS reported.
Palestinian groups returned fire on Israeli planes, Sawt al-Aqsa added.
Earlier in the day, there was an incident when flammable balloons, lifted from the Gaza Strip, caused at least three fires in southern Israel, Israeli media reported.
Photos and videos posted on social networks show Hamas activists releasing balloons, and one of them read: "Time is running out," the AP reported.

The Associated Press immediately estimated that the new cases of sending flammable balloons increased the possibility of repeated rocket attacks by Israel on Hamas.
Israeli planes attacked Gaza on July 3 and June 18, when they targeted Hamas training camps.
The ceasefire between Israel and Palestinian Hamas took effect on May 21, after 11 days of armed conflict.
TASS adds that during those 11 days, 257 people were killed and about 2.000 wounded in Gaza, while 13 people were killed in Israel.