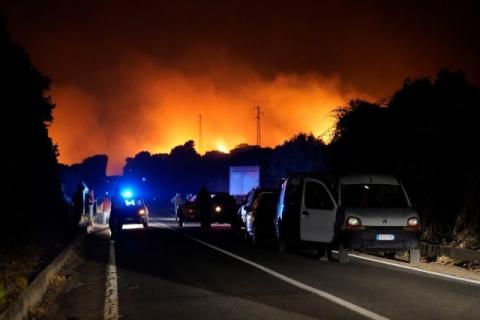 20.000 hectares of forest have already been destroyed, and 1.500 people have been evacuated.
7.500 people, helicopters and "Canadian" planes were mobilized to put out the fire. During the night, tourists who spent their summers in the port of Porto Alabe were evacuated. Fires are raging near 13 cities, and firefighters' efforts are hampered by strong and hot winds.

The newspapers in Sardinia describe the fire scene as apocalyptic, which can be seen in the videos. The president of the region of Sardinia, Christian Solinas, declared a state of emergency on the island and asked the government in Rome for emergency help due to the damage that the fire has done so far - animals have died, houses and businesses have been destroyed.
"This is an unprecedented natural disaster," said Christian Solinas.

Italy today asked European countries to send firefighting planes in order to stop the spread of fires on parts of the island of Sardinia. Italian Foreign Minister Luigi di Maio said on Facebook that the state civil protection asked for help, with gratitude for overall aid that has arrived from abroad so far. "Two planes from France are on their way to Sardinia, for which I officially thank you," Di Maio emphasized.

The fire engulfed the province of Oristano in the central part of the western region of the Italian island.
There were no reports of injuries, but ANSA states that 400 people were evacuated from their homes today, and a similar number of people were evacuated the night before.
The level of danger remains high, warned the Civil Protection.
Local authorities say it is too early to discuss the extent of the damage.