Gate of Hell to open to visitors 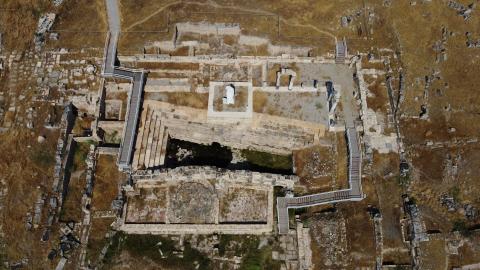 The Gate of Hell (Plutonium), which was discovered in 2013 in the excavations in the ancient city of Hierapolis, located next to Pamukkale in western Turkey, and which was considered as the "gateway to the land of the dead" in the ancient world, is set to be opened to visitors this year.

Thanks to modern science, the mystery of the gate has been solved during the examinations there. It was reported that the animals, sent to the cave during the sacred ceremonies held in the ancient times at the Gate of Hell, died due to the effect of carbon dioxide gas.

In the ancient city of Hierapolis, which was founded by the King of Pergamon Eumenes II in the 2nd century B.C. and means "holy city," an Italian excavation team, led by Professor Francesco D'Andria discovered a structure that sheds light on the past of the region.

D'Andria and his team found the Gate of Hell, which is considered the "gateway to the land of the dead" in the ancient world, and one of the original sources of thermal waters that formed the Pamukkale travertine pools.

After its discovery, the Gate of Hell was closed for the safety of visitors on the grounds that it was emitting poisonous gas, and excavation work has been initiated in the area.

Restoration work has been completed at the Gate of Hell, the mystery of which was solved after the investigations. The statue of Hades, the god of the underworld, and the three-headed guard dog of Hell, Kerberos, were also placed in the structure, a significant part of which was revived.

A walking path was also built around the Gate of Hell, which is planned to be opened to visitors in September, at a distance where the poisonous gas would not affect the visitors.